2020 started with high water prices that made pre-irrigation difficult to economically justify. The only positive was climate prediction models were telling an optimistic winter rainfall story.

April started with pre-irrigation of most of the trial locations. Most trials are conducted under best agronomic practice rather than an economic approach. Sowing started on April 17th with the long season wheat and barley trials. April delivered on the promise of good winter rainfall with a decile 9, or 88mm for the month.

May rainfall was below average (27mm), but this had an upside as it allowed sowing to occur, although some trials were delayed slightly as each rain event made the Trial Block too sticky to sow.

The wheat trials were sown on May 7th, barley and fabas on May 8th, chickpeas on May 18th and the durums and early maturity wheat trials on May 29th.

June and July saw below average rainfall, with 16mm and 10mm respectively. Trials sown on rainfall began to show some moisture stress and reduced growth compared to trials that had been pre-irrigated. The dry conditions presented few topdressing opportunities, but most trials were sitting on good soil N reserves thanks to being sown on brown manured vetch from 2019.

August finally delivered on the wet winter promised, with 28mm on the 7th, and 48mm for the month. Despite these totals, soil moisture monitoring in the ‘no pre-irrigation’ wheat trial showed no change in soil moisture at 30cm, with the crop continuing to draw moisture at this depth. Therefore we began spring irrigation on August 17th for the trials on the ‘red dirt’ – brown vertisol.

Stripe rust was observed in Trojan and DS Bennet on August 28th. 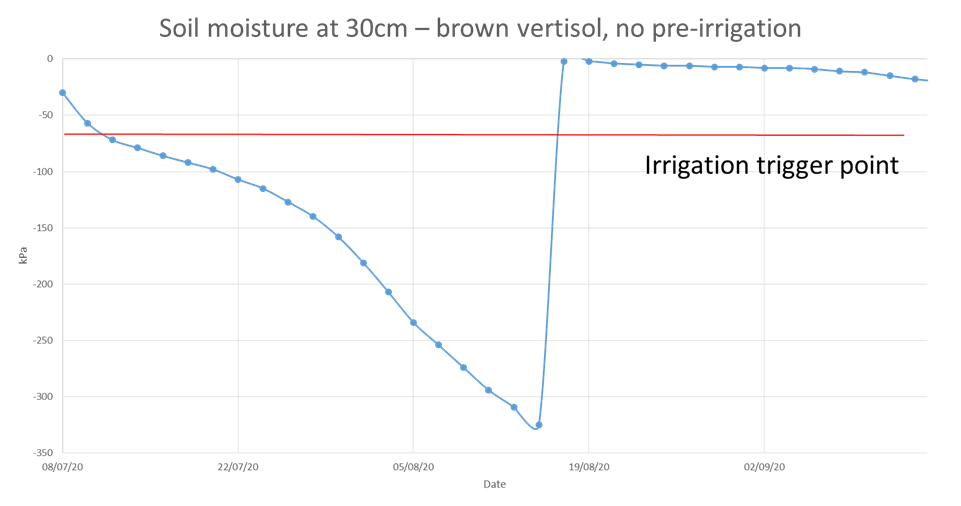 September saw fine and warm conditions which saw the trials start to draw down soil moisture reserves. Irrigation on the ‘grey dirt’ – grey vertisol, occurred on September 8th, and used approximately 0.9 Ml/ha. Stripe rust continued to spread, with small outbreaks across the Trial Block where a fungicide had not been applied. Disease in the pulse crops has been low, limited to cercospera low in the canopy in the faba beans.